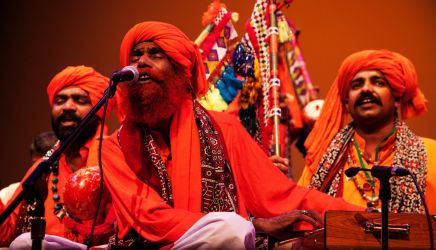 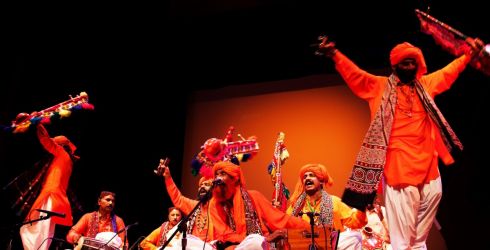 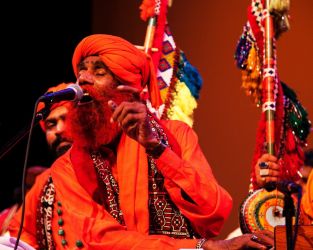 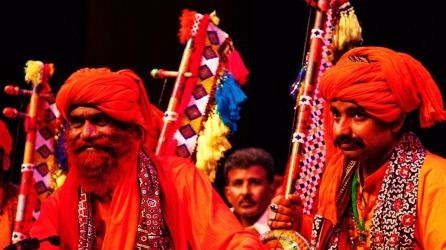 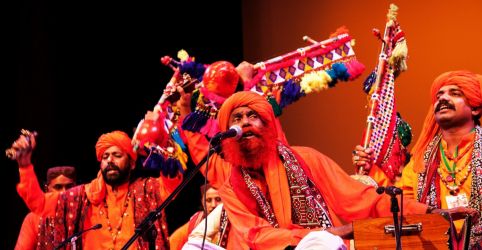 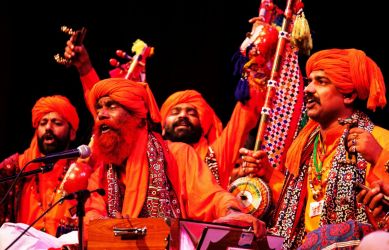 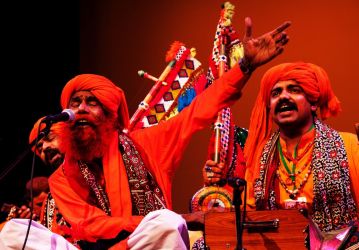 Founded in the iconoclast wake of he Chistiya Sufi saints, the sufi choral singing style specific to Sindh, "Soung", which can be literally translated as "being together", evokes not only the thrill of group unity in its energetic wave, but also the desired intimate union between musicians and their murshid, and eventually with the Divine. However, influenced by the Chistiyas, the Soung style stresses a very strong rhythmic component and spontaneous dance movements. Just like the ceremonial singing of the Bhit Shah shrine's faqirs, the Soung which is sung for the grace of the murshid is usually performed in front of him or his shrine.

In the Sufi music the Sindh region, especially in "Soung" style, the human voice becomes the vehicle of the burning message from the divine. It is a message, which linked with the free and compassionate humanity of the Sufi saints of the first centuries after Hagire, conquered hearts of millions of people in the sub-continent. The prominence of the singing takes its roots from the culture of the Sindh region, nowadays Pakistani, but which stands at the cross-roads of multiple encounters. In the low Indus valley, indeed, the local people's expressions and practices were fruitfully blended with the acknowledged tradition of classical Hindustani music. This fact added a certain haughtiness from this "great tradition" of Court culture, to these essentially rural traditions, embedded in people's mysticism.

However, it is from this area of Sindh, both arid and fertile, that emerged the most ancient vestiges of the famous Indus civilisation, also a major source of classical North-Indian music. And it is also from Sindh that a shining culture would develop, in the melting pot of many influences: Hindustani of course, but coming also from Persia, Central Asia as well as, particularly, from Arab countries. Indeed, the Arab period of Sindh spread over three centuries (711-1050), allowed the wandering minstrels called the "Lorees" or "Langhas" to disseminate their art of musical narration up to the distant borders of the Abasside Empire. The particular flavour of this flux influenced a number of European cultural expressions such as the Spanish Canto Jondo. The Gypsy journey, reaching its farthest towards the west in Iberia, also started from Sindh.

In this way, the nomadic children of these love minstrels slowly spread the well known Sur musical styles. The revered poet Shah Abdul Latif Bhittai synthesised this style in his treaty "Shah-o-Rag". Bringing closer the wide repertory of folk songs to this well-known musical tradition, the Bhit Shah saint combines them with quite seducing melodies. The loving lady appears as the symbol of the soul, in its incessant quest for the Beloved, beyond all obstacles, across all frontiers: the flame of divine love devours hearts, be it the heart of the Hindu yogi, the Christian mystic or the Sufi malang. Now, it is this glowing ember that Jamaluddin Fakir sings, particularly as a follower of Sachal Sarmast, may be the most exuberant Sindhi poet blessed in his childhood by Shah Latif, who said about him: "The vessel I have put on fire, its lid will be removed by him".

Known as the "haft zaban shair", or the poet of seven languages -Sindhi, Arabic, Persian, Saraiki, Punjabi, Urdu and Hindi-, Sachal Sarmast (Sachal: speaker of truth, Sarmast: intoxicated) is considered as one the most outspoken mystic poets of Wahdat-al-Wujood (or mystical) school of thought where the whole creation of God is considered as God Himself. The shrine of this revered intoxicated speaker of truth, born in 1739 as Abdul Haq and died in 1827, lies in Dazara, nearby Khairpur, and today is still highly revered by Muslims and Hindus, both. After all, in one of his poems, he inspiringly says "Ram and Rahim are one and the same, which you must clearly understand in order to avail the pleasure of (true) love…You must not take infidel, true Muslim, Hindu and Christian as strangers to each other. They all emerge from the same origin, stock and shape, and when you are able to know yourself, you will see that I and you are one, commanding the same features and shape" , a deep truth that Jamaluddin Faqir vibrantly expresses with a brilliant "Soung" intensity.

Jamaluddin Fakir is a bright representative of Sufi Soung choral singing style of Sindh region. He was born as son of a Sufi Singer, Misri Fakir, in the small village of Chhutan Wasan, District Sanghar, in 1952. He acquired initial musical education music from his father up to 18 years old, when his father died. Afterwards, he devoted even more time to the learning music with Moula Bux Fakir who was also the student of his father Misri Fakir and from whom he learned many new raags. In the mean time, he also learned to read and write Arabis script. In 2008, he completed his hand-written Holy Quran.

Jamaluddin Fakir has a distinct and melodious voice. Within a short time, his voice and style got a great recognition. Distinctiveness of his art inspired larger audiences here and elsewhere in the world. He sings frequently the poems of such revered sufi saints as Shah Abdul Latif Bhitai, Manthar and Sachal Sarmast.

First with late Sohrab Fakir, the great musician of Soung style in the recent times, later, after Sohrab's death, with his own group, Jamaluddin Fakir has had performances in many countries, including Italy, France, Holland, Belgium, United Kingdom, USA and Tunisia.

In order to pay tribute to his immortal voice, many awards were conferred upon him, such as the Latif Award (twice, in 2001 & 2013), the Sachal Award in 2013, the Sindhi Association of North America (SANA)’s one in 2014, the Misri Shah Award in 2001 as well as the Pakistan Television PTV and the Lok Virsa (Pakistan Folk Heritage Institute) Awards.