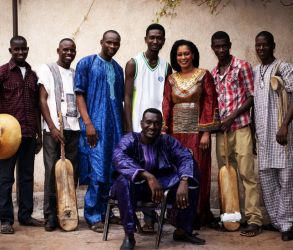 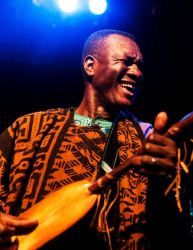 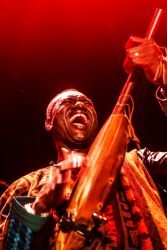 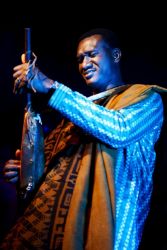 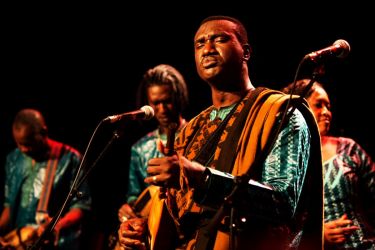 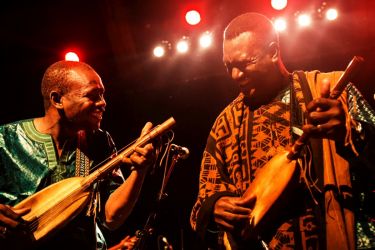 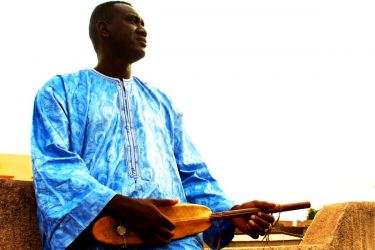 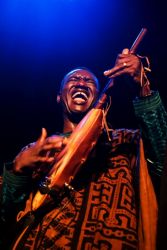 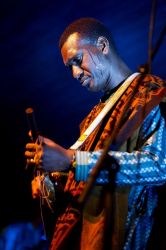 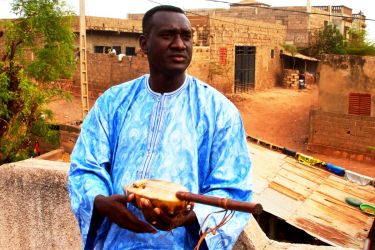 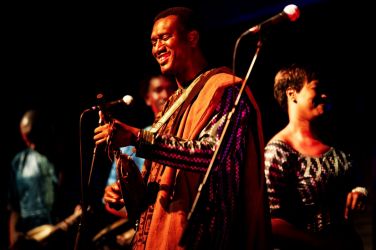 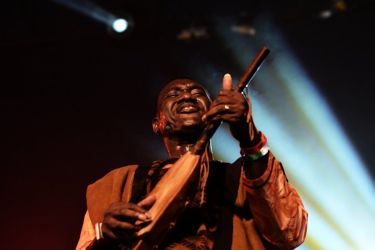 Ngoni is one of the ancient string instruments of Mande peoples of Western Africa. It may be one of the oldest instruments on earth and its history goes back to thousands of years. Its body is made of wood or calabash with dried animal (often goat) skin head stretched over it. The neck is a fretless piece of wood inserted into the body. The stings strings are lashed to the neck with movable strips of leather, and then fed over a fan-shaped bridge at the far end of the body.

It is known to have existed since 1352, when Ibn Battuta, a Moroccan traveller reported seeing one in the court of Mansa Musa. Various versions of it differing mainly in size are known to exist in a vast region in North and Sub Saharan Africa. It has been played by griots at celebrations, special occasions and for ceremonial purposes since ancient times and is believed to have evolved into the banjo in North America after Mande slaves were displaced there.

Ngoni, along with the kora is one of the instruments of the griots, the hereditary historians, poets, praise singers and wandering musicians of the west African cultures. A griot might have disciples, but his immediate family, especially sons takes precedence to hand down the tradition and the skills. For this reason, it is possible to find families who have been griots for many generations. Being a repository of the oral tradition, one function of the griots was to recite the legends in the mythologies of their culture. These legends included the stories of the gods and goddesses which people believed in, the explanations regarding the natural world and the supernatural, interpretations of concepts like creation, death and afterlife and being so, they shaped the spiritual life and religious beliefs of the peoples of Western Africa. Griot, as the person who inherited, enacted, preserved and lastly passed on these legends was an important character in the religious practice. In addition, they took part in all important events in the lives of people like the festivals, weddings, holidays and child naming. Even after Islam became the dominant religion in the region, the griot preserved his social position, this time choosing the stories and subjects from the Islamic tradition or teachings.

Bassekou Kouyate was born in 1966 in Garana, a small and multi-ethnic village located at the banks of the Niger river. Garana is at the nexus of several villages with deep griot traditions. These same villages provided many of the celebrated griots throughout the history and the songs of the past are the constant inspiration behind Bassekou’s music.

Bassekou descends from a long line of griots on both sides. He is the son of Moustapha Kouyate, who played the ngoniba, or large lute, and Yakare Damba, a singer. Bassekou was taught the ngoni by his father, who used to hold group classes with all the boys in his household in Garana. He also spent time with his grandfather, the great old musician Banzoumana Sissoko, who taught him many things on the ngoni.

After his father became ill in the late 70s, Bassekou took his place on his mother's next tour to Burkina Faso at the age of 16. After this, by working with several musicians of the Griot music scene, Bassekou began to develop his own techniques on the ngoni. He added strings to his instrument to give him a wider melodic range. He was also the first to play the ngoni standing up. This boosted the image of the ngoni as an instrument that could compete with modern guitars, which until then had been threatening to eclipse the ngoni in the region. Around this time he also experimented with different ways of plucking the strings, which allowed for faster runs and more versatility.

Soon afterwards he become acquainted with another extraordinary musician of the new generation, the kora player Toumani Diabate. Toumani and Bassekou recognized kindred musical spirits in each other: their goal was to advance their style of playing and to open the music of the griots towards the rest of the world by expanding the scope of their instruments. Just like Toumani was a pioneer in bringing Kora to the attention of audiances worldwide, Bassekou did the same for ngoni. Symmetric trio which he founded with Toumani and Balafon player Keletigui Diabate was revolutionary in traditional Malian music performance. His first European tour was with Symmetric Trio in 1990.

In 2005 he was invited by Ali Farka Touré to play on his album ‘Savane’ and to join Ali on stage for his final tour in the summer of 2005. The same year, after the untimely death of Toure, Bassekou created Ngoni Ba. He wanted people to actually know what the ngoni sounded like on its own without Kora or guitar accompaniment. Bassekou emphasized the special qualities of the ngoni. And so Bassekou decided to create a new type of ensemble: a quartet of different sized ngonis. It was a novel idea, but it was also very old – the rulers of precolonial times occasionally had bands of up to 30 or 40 ngoni players, all playing together. So once again, Bassekou was making something new out of something very old, which is how Mande griots have kept their music alive for centuries.

Ngoni Ba's first album, “Segu Blue”, was one of the most celebrated African releases of 2007. It was nominated 3 times for the BBC 3 awards for world music and was awarded twice: best album 2007 (by the critics) and best African artist. Since then Bassekou Kouyate & Ngoni Ba have toured extensively all over Europe, Africa and even the Caribbean.

In Mali the success of the group has led to a revival of an instrument that had been neglected in the last years. Ngoni Ba has become one of Mali’s most influential bands of the 21st century – sending an important message to the youth of just how much life and soul there still is in their own ancient musical traditions. As Songlines puts it in 2011: “Bassekou has revolutionized the way the ngoni is perceived, transforming it into a lead instrument.” In only 5 years Bassekou Kouyate & Ngoniba have toured the world performing hundreds of shows.

In 2009 follow up album “I speak Fula” was released and collected a Grammy nomination. Meanwhile Bassekou Kouyate was awarded one of the highest Malian honours and made a chevalier de l’ordre national du Mali. He has also become one of the stars of the Grammy nominated project Afrocubism.