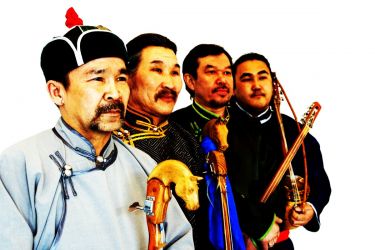 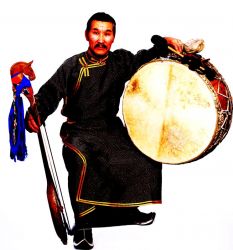 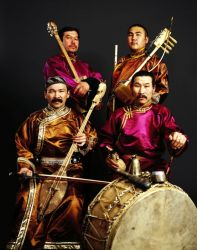 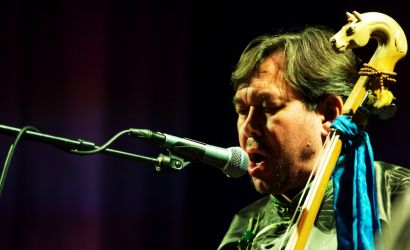 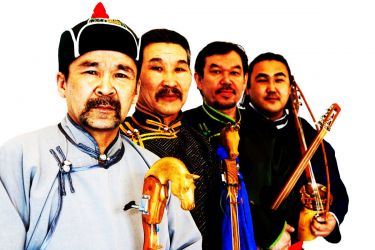 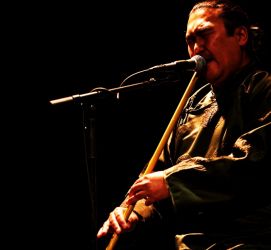 Throat singing is a form of overtone singing common in many regions of Central Asia in different forms. In overtone singing, along with a fundamental pitch, its harmonics are created too. These overtones always exist in normal sound production; however, they are so low that they are never recognized. By subtle manipulations of the vocal tract and keen listening, one can break up the sound, amplifying one or more overtones enough so that they can be heard as additional pitches while the fundamental pitch continues at a lower volume. According to one theory, this kind of sound generation was utilized by the nomadic herdsman of Central Asia to communicate through long distances, which is a crucial need for a people inhabiting a harsh environment and living in small groups far apart from each other. It is important to note that, the landscape of the region, with its vast steppes, provided ample open space for the sound to carry over long distances with little reflection. When what nature supported matched with human needs, there came the overtone sound generation.

It is widely accepted that at the root of overtone singing lies the human mimicry of nature sounds. In the sound of the blowing wind, or a whistling bird, or a growling animal or a bubbling stream, there always exists the overtones, either strongly or very faintly. Overtone singing is the search of a man for these natural sounds in his own voice. This search, though, is highly loaded with the animistic world view which attributes a spirit to everything in nature. Imitating the natural sounds is also a way of communicating with the spirits inhabiting the sources of those sounds. This is why the shamans use this technique to talk to the spirits, to get into the realm of the supernatural. The state of trance created by the mesmerizing effect of overtone singing is interpreted as a journey to the supernatural world where the shaman either guides the spirit of a dead person to their proper abode, or heals ailments by repelling the evil spirits which were seen as the reason behind the disease. Note that, Central Asian shamanism is not the only belief system utilizing overtone singing. For example Tibetan monks of Buddhist Temples use the same technique in their meditation.

Tuva, a small region close to Mongolia is unique in that people of this region turned the throat singing, common to almost all the groups in Central Asia, into an art form. With this, throat singing, once a way of communication in the most natural way, and then a vehicle of religious practice to talk to spirits, gained a third function: music. This required a perfect control over and full mastery of the human voice. Once this task was accomplished at a virtuosic level, there emerged the Tuvan music, a tradition fascinating in the sense that it is both deeply spiritual and at the same time involved with the everyday world due to the sacred and profane aspects of overtone singing.

Once turned into a singing style, Tuvan musicians elaborated on the technique and created different styles. "Sygyt" for example is a high pitch sharp whistling sound floating above the fundamental pitch, evoking the gentle breezes of summer or songs of the birds. "Xöömei" is similar to Sygyt, differing only in that the overtone is lower and it sounds like wind swirling among the rocks."Kargyraa" is a low pitch style with an undertone accompanying the fundamental pitch. It suggests the growling of animals. "Borbangnadyr", an embellishment of basic styles above, infused with a trilling effect and suggesting a bubbling stream. Lastly, "Ezeengiler", again an embellishment, this time adding a pulsing rhythm and evoking the sound of the whip tapping the stirrups while riding a horse.

The igil is a two-stringed instrument whose teardrop-shaped body is held between the legs while playing. The peghead of the instrument is often decorated with the carved head of a horse. The sound box may be made entirely of wood, or the face of the instrument may be goat skin stretched across the frame. The strings are made of horsehair. They are fingered very lightly, not pressed to the fingerboard.

The doshpuluur is a plucked instrument with un-fretted strings. The trapezoidal sound box is made either entirely from wood or with goat skin stretched across a wooden frame.

The word "byzaanchy" comes from the Tuvan word for calf. The instrument has four strings, like the four udders of a cow, and it is said that playing the byzaanchy is like milking the sound out of the instrument. The sound box is covered with goat skin in front and is open in back. The byzaanchy shares a unique feature with the Chinese huqin family of instruments: the bow is threaded between the strings so that it is drawn across both the upper and lower surfaces of the horsehair. The strings are fingered lightly from underneath rather than being pressed against the neck.

The chanzy, like the doshpuluur, is a three-stringed plucked instrument. It produces a louder tone than the doshpuluur, and is commonly used throughout Central Asia to accompany throat singing.

The chadagan is a plucked zither. Related instruments are the Mongolian yatga, the Khakassian chatkhan (or jadagan), the Japanese koto, and the Chinese guzheng. The number of strings varies, and the bridge is sometimes movable.

The kengirge is a large frame drum, introduced into Tuva by the Tibetan Buddhists. The sides of the kengirge are made of goat skin which is tapped with the fingers or struck with a mallet. The drum is tuned by tightening or slackening the straps around the frame. Sitting atop the kengirge is the shyngyrash, a set of small bells threaded together. Striking the top of the drum causes the bells to jingle. Such bells serve as ornaments on the heads or necks of horses, so the rhythmic jingling of the bells evokes the sound of trotting horses.

The xomus (or khomus) is a jaw harp. The metal xomus used in Tuvan music is called the demir-xomus. The instrument consists of a flexible metal tongue attached to a frame. The frame is held against the performer's teeth, and the metal tongue is plucked with the finger to produce a note. The xomus is a one-pitch instrument, but the player, by changing the shape of his mouth and the flow of air, creates melodies by emphasizing various overtones.

Murgu is an overtone flute, an end-blown tube with no holes, usually made from the stalk of an angelica plant. Melodies are produced by adjusting the airflow and covering or uncovering the bottom end with a finger.

Shoor is a long end-blown flute made from a hollowed-out willow or larch branch, with holes for varying the pitch. The player places the shoor in the corner of his mouth, with the end partly in front of the teeth, partly behind them, and uses his tongue to complete the embouchure.

Limbi is a side-blown, open-ended flute made of wood or bamboo, with holes for controlling the pitch. The number of holes varies.

Amyrga is a hunting horn made to imitate the mating call of the male Siberian red deer. The long conical tube is generally carved from Siberian pine in two halves which are fastened together with birch bark. The player inhales rather than exhales to produce a tone.

The khöömei quartet Kungurtuk was founded in 1992 by prominent musicians of Tuvan traditional music. Not long afterwards, the group changed its name to Huun-Huur-Tu, meaning “sunbeams” (literally “sun propeller”). The name of this group describes the effect of vertical rays of light which shine down from the clouds at dawn and dusk – a familiar sight that inspires awe wherever it occurs. No doubt it's given added drama when projected over the stunning landscapes of Tuva.

Huun-Huur-Tu was one of the first groups to combine throat singing with ancient acoustic instruments and were pioneers in introducing the ancient traditions of Tuva to the audiences worldwide. The focus of their music is traditional Tuvan songs, frequently featuring imagery of the Tuvan steppe or of horses.

The ensemble released its first album, "60 Horses In My Herd", in 1993 and "The Orphan's Lament", second one in 1994. A third album, "If I'd Been Born An Eagle" followed in 1997. In early 1999, the group released its fourth album, "Where Young Grass Grows". All albums gained great success and provided international renown for the group.

Huun-Huur-Tu participated in the 2000 BBC Music Live event, performing the opening and closing songs for a live broadcast. The following year, the group released their first live album. Since the group's inception, Huun Huur Tu has gone through several changes in its line up but has always been not only the most prominent group of Tuvan Music but also an institution where this music became an inspiration for many followers of the group. The group was among the nominees for the BBC World Music Awards in 2004.