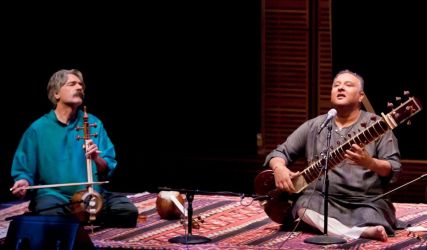 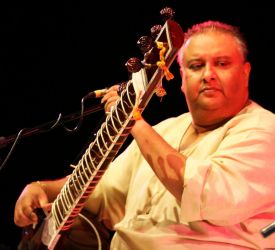 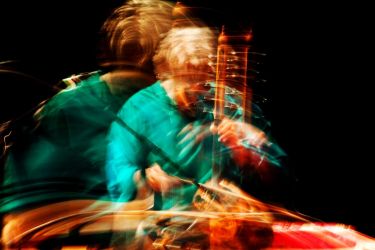 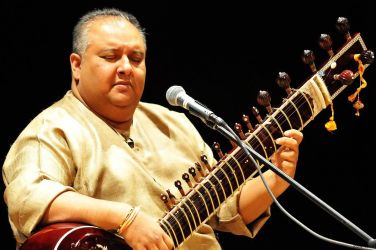 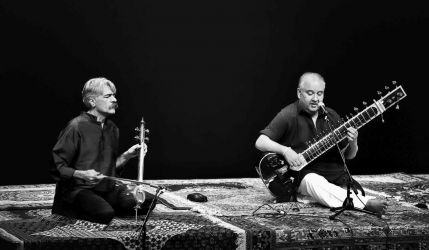 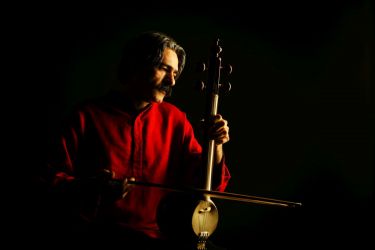 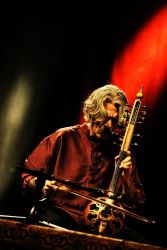 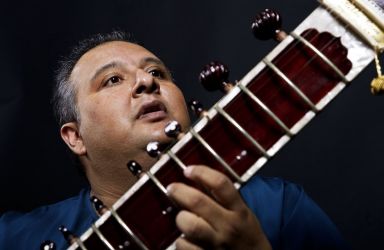 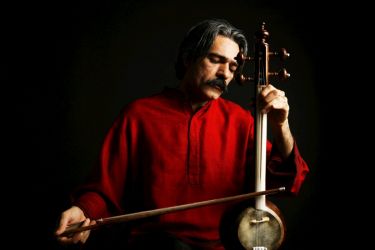 The synthesis of two great cultures, India and Persia, took place thousands of years ago. Their common roots – the Indo-Persian language, the oldest Persian religion – Mithraism and their related myths, plus many aspects of their social and spiritual lives – have inextricably bound these two cultures together.

At the turn of 13th century a number of Sufi scholars, among them the Persian poet, historian and musician, Amir Khusrau, had a profound influence on classical music of North India. From Amir Khusaru’s time until well into the Mughal period foreign music, particularly Persian, was commonly heard at the Indian courts. Khusrau was a great innovator and is popularly credited with the introduction of a number of Persian elements into Indian music, including vocal forms (qawwali and tarana), ragas and talas, and musical instruments such as the sitar and tabla.

The most important advances in Indian music were made between the 14th and 18th centuries. During this period, Hindustani music came into contact with Persian music and assimilated it through the Pathan and Mongol invasions. At the same time, Persian music experienced a great transformation from the Maqam to the Dastgah system. Although there exist common features of Hindustani Raga and Persian Dastgah, the two can be clearly delineated from one another. In this respect, the Dastgah and the Raga must be considered as two different systems, which have been formed by the social and cultural aspects of their people. These two independent musical fields represent the Indic tradition with their Raga system, and the Near and Middle Eastern world with their Maqam and Dastgah systems.

A Dastgah is a collection of melodic forms (Gushehs), which create the repertory of Iranian classical music or Radif. The Radif is organized into 12 modes, 7 primary and 5 secondary, which are named after the principal and primary melodic phrase called Darmand. The intervallic structure within a Dastgah, and sometimes even within a Gusheh, is varied. The Dastgah and its constituent Gushehs provide a framework for creative improvisation and composition. The Radif includes more than four hundred Gushehs. The number of Gushehs in a Dastgah varies between fifteen and forty or more. Traditionally a performer may choose some six to ten Gushehs in one performance. In comparison to Hindustani music, where modulation doesn’t occur, changing modes is feasible within the boundary of a Dastgah.

The Raga forms the backbone of Indian classic music. A Raga is a melodic structure with a basic scale of seven notes with five basic accidentals and up to twenty-two microtonal forms. Every Raga must have at least five notes and can have up to twelve. Ragas using the same basic scale may be differentiated by different vadi (dominant note) or samvadi (sub dominant note), which are emphasized in the development of the Raga. Melodic ornamentation is complex and essential, and also employs microtonal fluctuations on selected pitches. Hundreds of Raga exist today, sometimes in different forms and different traditions (gharanas).

Both Indian and Persian classical music is characterized by its microtonal and monophonic structure and by its dependence on improvisation. In each of these traditions, a master musician uses a primary melodic form as a base for improvising. There are many factors involved in a musicians’ understanding of and approach to music. Each musician’s schooling (the Indian gharana and Iranian maktab), personal style, technical ability and vision have great impact on their approach to developing their musical ideas. This makes every performance, even of the same Raga or Dastgah, exciting, fresh and unpredictable every time it is performed.

Kayhan Kalhor is an internationally acclaimed virtuoso on the kamancheh. His performances of Persian music and his many collaborations have attracted audiences around the globe.

Born in Tehran, Iran, he began his musical studies at the age of seven. At thirteen, he was invited to work with the National Orchestra of Radio and Television of Iran, where he performed for five years. When he was seventeen he began working with the Shayda Ensemble of the Chavosh Cultural Center, the most prestigious arts organization in Iran at the time. He has traveled extensively throughout Iran, studying the music of its many regions, in particular those of Khorason and Kordestan.

Kayhan has toured the world as a soloist with various ensembles and orchestras including the New York Philharmonic and the Orchestre National de Lyon. He is co-founder of the renowned ensembles Dastan, Ghazal: Persian & Indian Improvisations and Masters of Persian Music. Kayhan has composed works for Iran’s most renowned vocalists Mohammad Reza Shajarian and Shahram Nazeri and has also performed and recorded with Iran’s greatest instrumentalists. He has composed music for television and film and was featured on the soundtrack of Francis Ford Copolla’s Youth Without Youth in a score that he collaborated on with Osvaldo Golijov. In 2004, he was invited by American composer John Adams to give a solo recital at Carnegie Hall as part of his Perspectives Series and in the same year he appeared on a double bill at Lincoln Center’s Mostly Mozart Festival, sharing the program with the Festival Orchestra performing the Mozart Requiem. Kayhan is an original member of Yo-Yo Ma’s Silk Road Project and his compositions "Blue as the Turquoise Night of Neyshabur", "Silent City" and "Mountains Are Far Away", appear on all three of the Ensemble’s albums. Three of his recordings have been nominated for Grammys, "Faryad", "Without You" and "The Rain".

Shujaat Husain Khan is one of the greatest North Indian classical musicians of his generation. He belongs to the Imdad Khan gharana of the sitar and his style of playing sitar, known as the gayaki ang, is imitative of the subtleties of the human voice. Shujaat Khan’s musical pedigree extends seven generations. He is the son and disciple of the great sitarist Ustad Vilayat Khan, and his grandfather, Ustad Inayat Khan. Khan’s musical career began at the age of three when he began practicing on a specially made small sitar. By the age of six, he was recognized as a child prodigy and began giving public performances.

Shujaat Khan has performed at all the prestigious music festivals in India and has performed throughout Asia, Africa, North America, and Europe. Audiences around the world are captivated by his unique style of sitar playing, his exceptional voice, and his intuitive and spontaneous approach to rhythm. In 2007, he was the featured artist at musical concerts celebrating India’s 50th anniversary of independence at Carnegie Hall in New York. Khan was also the sole artist representing India in a special performance at the United Nations General Assembly Hall in Geneva commemorating India’s independence the same year. Alongside his many notable performances, Khan has been a regularly featured artist at prestigious concert halls including Royal Albert Hall in London, Royce Hall in Los Angeles, and Congress Hall in Berlin.

Shujaat Khan has also collaborated with different genres of music. The Rain, an album featuring Shujaat Khan and the Indo-Persian Ghazal ensemble. In 2010, Shujaat Khan worked with Asha Bhosle in releasing Naina Lagai Ke. Their album was selected as a “Top Ten Best New Album Release” by the editor of Songlines Magazine and was featured in the magazine’s exclusive “Top of the World CD” in 2011.

Sandeep Das is one of the world’s leading tabla virtuosos. A favorite disciple of the legendary tabla maestro Pandit Kishan Maharaj of the Benaras Gharana, he has built a diverse international career, collaborating with a variety of genre-crossing artists. Das is founder of HUM (Harmony and Universality through Music), an ensemble promoting global understanding through performance and education. He is a Grammy-nominated recording artist in his own right.

Sandeep’s debut at the age of 16 was with the legendary Pt. Ravi Shankar. In India and abroad, he performs frequently with stars of Indian music such as Ustad Amjad Ali Khan, Pandit Shiv Kumar Sharma, Pandit Hari Prasad Chaurasia, Dr. L Subramaniam and Ustad Shujaat Khan, among many others. He was three times the All-India drumming champion and is the youngest Tabla player ever to be graded by All-India radio.