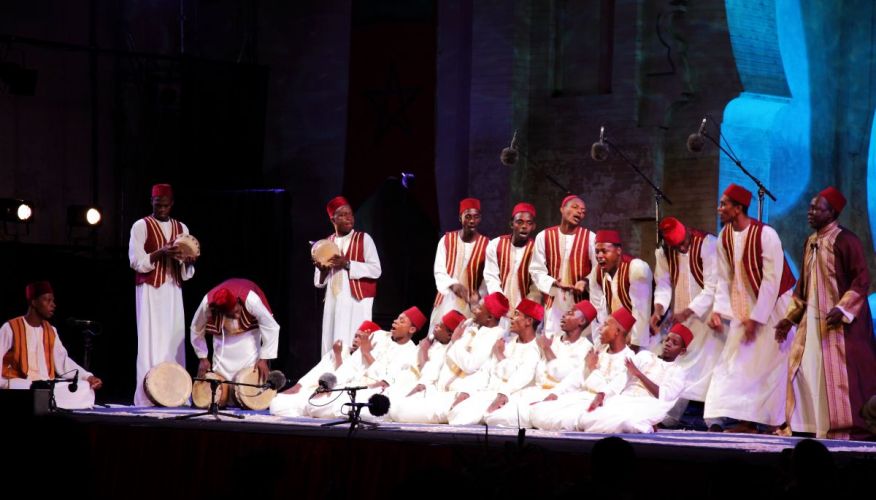 Maulidi ya Homu: A Sufi Performance From Zanzibar

Sufi devotional cereony Maulidi ya Homu has roots in the ancient Arab world and African traditions, but today survives only in Zanzibar. Maulidi ya Homu is associated with the tariqa founded by Ahmad al-Rifa’i. The Rifa’iyya originating in Egypt has spread over the Near East, but also as far as Indonesia, the Comoros, and Zanzibar. The form of Maulidi ya Homu performed today is thought to have originated from Iraq and came to Zanzibar around 1800. Over time the performance has become distinctly Zanzibari blending local ngoma traditions with more general Islamic elements.

The performance is opened with a communal recitation of shorter suras from the Qur’an. Then the group commences with an a capella introduction led by the khalifa or msomaji ‘reader’: He establishes a basic rhythm and tone, which gradually crescendos into a sound that fills the entire space. In due course he accompanies his voice by an ever faster rhythm beating on a brass tray with a wooden stick. Progressively arm and hand movements are introduced performed by a row of men and boys of all ages – dressed in white kanzu ‘djellabiya’ and kofia ‘hats’ – in the front. The rusi (leader of the group’s physical motions) coordinates this part of the ensemble. The remaining performers stand in a second row behind them, they sing the chorus parts and dance swaying from one side to the other. As a third and final component the voice and movements are joined by matari ‘frame drums.’: Starting out calmly and slowly, the performance gradually increases in volume, tempo and dynamism of movement, up to an animated climax. These sections are called dahala. A performance generally consists of three or four dahalas and is closed by a du’a ‘supplication.’ One person also serves as the shawishi ‘group’s waiter’ who throughout the performance burns udi ‘aloe wood’ and ubani ‘incense’ and sprinkles marashi ‘rosewater’ over the performers and the audience.

The front line is the visual center of attention: kneeling down they slowly start with poised hand movements and gradually introduce the head and the whole body. The dance is composed of smaller segments each with names that are being announced by the rusi who chooses whichever choreographic unit he sees fit to the intensity of singing. The movements range from gentle gestures with hands and head to motions reminiscent of Muslim prayer to a fast to and fro clasping each other’s arms and rhythmical clapping over the head. The kofia hats may also be laid out in front of the dancers then waved around holding them with the teeth. Another unit includes the dancers bending backwards and lying down completely before rising up again. The sometimes acrobatic quality of movements demands stamina and zest of the dancers. All the while singing chorus lines as well they perform an amazingly varied and intricate choreography.

During each dahala section qasida ‘praise poems’ are sung in a medley-like fashion, one merging into the next. The qasida are either in Arabic or Swahili and topically praise God and Muhammad, describe the duties of Muslims, relate knowledge of heaven and hell, and celebrate life. Although it is a cultural performance, the religious benefits are highlighted, as those hosting the performance hope to receive baraka ‘blessings’ and the social respect of celebrating within a community of Muslims.